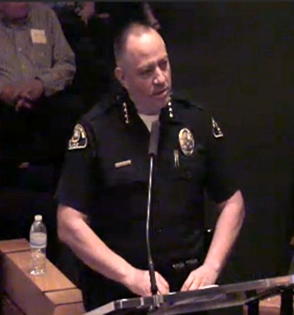 Police Chief Raul Quezada’s claim his department was clueless as to when and where the Ku Klux Klan would arrive at Pearson Park on Saturday, Feb. 27th is contradicted by police emails

On the evening of Tuesday, March 1, 2016, Anaheim Mayor Tom Tait requested that Police Chief Raul Quezada give a report to the city council about “police response” to a bloody melee that occurred at Pearson Park three days earlier, where a group of anti-racist counter-protesters violently clashed with Ku Klux Klan members, some armed with knives, who came to town to hold a “White Lives Do Matter” rally.

When Chief Quezada stepped up to the podium, he thanked the Mayor and Council for giving him the “opportunity to provide some insight” into this issue, allowing him to “share and clarify some of the facts.” He pointed out that its “important that our community, including those in attendance and those who are watching, maintain the confidence in the police department because we are in fact here to serve them.”

Quezada began his comments by stating that the Anaheim Police Department was “made aware” of the pending rally when a Klan member contacted them asking for security:

We were made aware of the protest on the 23rd or a few days prior to that with respect to via a telephone call from one of the Klan members. During that conversation, there was a request to hire police officers to protect them. That is not our function. We provided alternatives, which they did not take.

“At the time of that conversation,” he said, “the Klan indicated they would be here at 1:30 in the afternoon. That is not the time they arrived [last Saturday]. They arrived at closer to 11:30.”

The Chief then spent the next couple of minutes giving a brief rundown of how prepared his officers were in handling anything that transpired at Pearson Park. In closing remarks, he veered back to the Klan, essentially hinting that they unexpectedly showed up at a time and place they weren’t scheduled to be present.

[T]he information we never have specifically is what time they were going to arrive, where they’re going to park. They can park down the street, walk their way. That information is not something we [had] available. Nor that’s something that is mandated that they share with us. Any protest can take place at any time and does not have to be notification of the police department. Sometimes out of courtesy, they make the phone call.

Again, in this instance, the police department was prepared. We had adequate resources available. The KKK arrived two hours prior to the notification of the scheduled time that they were supposed to be there; that they had communicated with us.

“Very good, I think the time sequence is important,” Tait said to the Chief after he finished his presentation.

But The Anaheim Investigator is in possession of internal police emails, obtained under a California Public Records Act request, which not only contradict the Chief’s claim his department was clueless about when and where the Klansmen would be at Pearson Park that day, but they suggest he’s made misleading statements about the “time sequence,” both to the city council and members of the general public.

The emails begin with one with the subject header, “KKK Rally,” sent out on Wednesday, February 24th to Lieutenant Curtis Faulkner, the Community Policing Team District Commander for the Central and East Districts. According to Detective Chuck Schroth of the Criminal Intelligence Unit, he received a voice message from Charles Donner, a 51-year old Klansman who lives in San Francisco.

He was asking for uniformed protection for their upcoming march because of issues with “non-whites” last year. In the VM Mr. Donner said the desk sgt gave him my number. Mr. Donner requested a call back at [INFORMATION REDACTED].

Let me know if you want me to do anything with this.

“We don’t provide for uniformed protection unless they want to pay for police services,” Faulkner replied. “[The Community Policing Team] will contact Mr. Donner.”

Two days later, on the morning of Friday, February 26th–roughly 24-hours before the rally–Sergeant Chris Masilon, a Community Policing Team officer, emailed Faulkner. “[Donner] left me a VM,” he wrote. “He informed me they are going to hire their own ARMED SECURITY. I’ve called him back and left a VM.”

Within fifteen minutes, the Lieutenant received another email from Masilon:

OK I just talked to [Donner]. I told him he cannot have armed security in the park, so he is going to scrap his security plan. If he decides to hire non armed security, he will call me back and let me know.

He is approximating 20 people in his group and they will be protesting on the west side of the park near Harbor Blvd.

Rocio said they were talking about this event on KROQ this am. [sic]

“Copy thanks Chris,” Faulkner shot back.

The existence of these emails are quite revealing in that they contain information which  undermines–if not decimates–Chief Quezada’s misleading claim that the Klan unexpectedly showed up to Pearson Park at 11:30 a.m. According to multiple eyewitness accounts, a handful of Klansmen in a black Chevrolet sport utility vehicle arrived near the Southwest corner of the park shortly after 12-noon–the exact same time (and place) Donner told Sergeant Masilon they would be there.

Additionally, the Klan’s arrival time was documented, albeit indirectly, by Sergeant Daron Wyatt, Public Information Officer for the Anaheim Police Department, who issued a press release later stating that “[a]t approximately 12:10 pm on Saturday, violence erupted when six suspected members of the Ku Klux Klan (KKK) arrived on the south side of Pearson Park for a planned walking protest.” In an updated press release, he wrote that violence “erupted just after noon.”

The Investigator is baffled as to the reason why Quezada would risk his reputation to disseminate false information about the Klan’s arrival time. Recently, his department has come under fire for failing to deploy uniformed officers to “keep the peace” at Pearson Park. One can speculate this is a form of “damage control”: by arguing the Klan unexpectedly showed up on scene, he can say his officers didn’t have enough time to take appropriate measures to keep them away from counter-protesters.

In a future posting, The Investigator plans to explore the issue of “media spin” further and critically examine allegations made by the OC Weekly that the Anaheim Police Department spread disinformation about the exact time of the Klan rally before it happened to confuse counter-protesters. Although it’s unclear if this occurred, The Investigator is in possession of evidence showing the police disseminated false information about this matter hours after the Klan communicated with them.

[Below are the police emails used for this article] 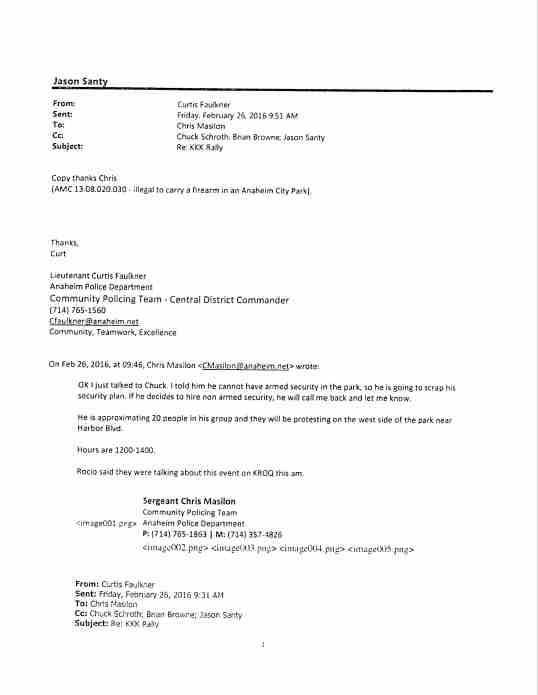 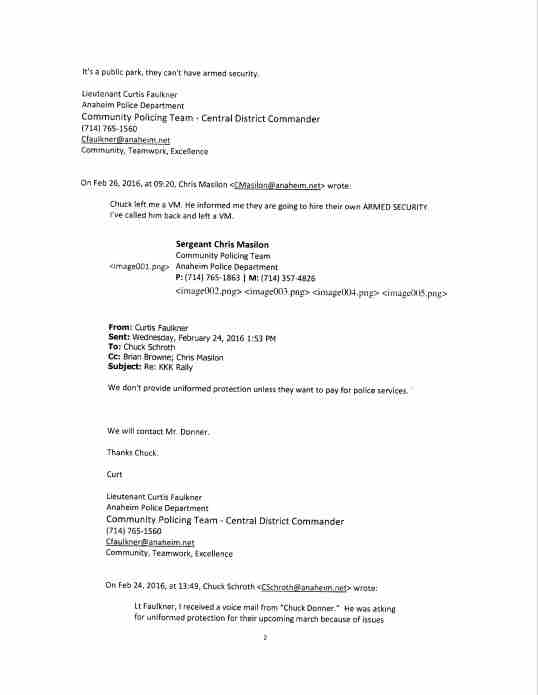 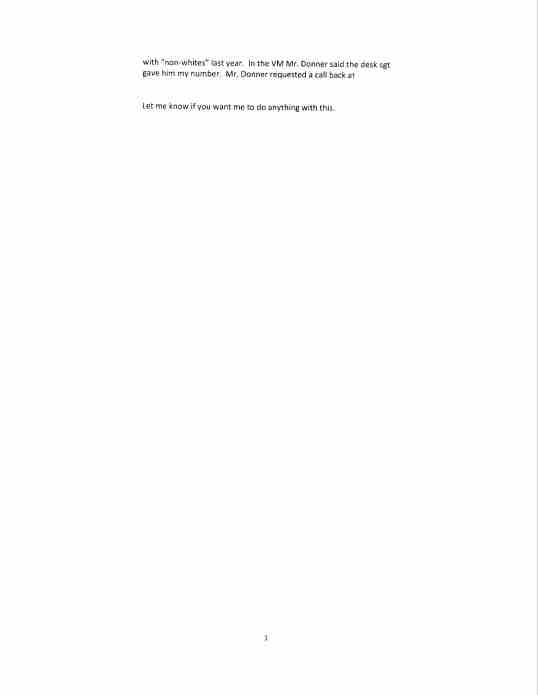