Archive for the category “Amelia Castro” 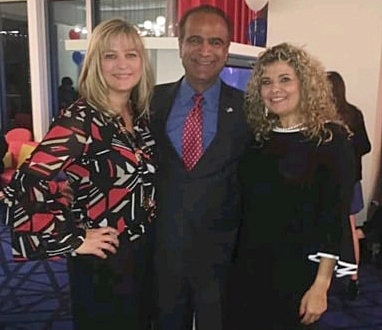 Kris Murray with Mayor-elect Harry Sidhu and Amelia Castro (now a member of Anaheim First’s Board of Directors) at the Disneyland Hotel in 2018.

A chain of emails the Anaheim Investigator recently obtained from the City of Anaheim during a routine California Public Records Act request strongly suggest that Kris Murray, a former Anaheim City Councilwoman, is working as a paid consultant for Anaheim First, a shadowy 501(c)3 nonprofit group created by the Anaheim Chamber of Commerce to promote its interests.

The first email in the chain, written by Xochitl Medrano, Director of Community Engagement for Anaheim First, consists of a message “reaching out” to David Belmer, Director of the Planning and Building Department, “on behalf of Leslie Swan and Kris Murray with Anaheim First,” inviting him to speak to their members later that month at the Chamber’s office near Angel Stadium.

It is reproduced here in its entirety:

I tried leaving you a voicemail on your office line but I wanted to make sure you also have my email. My name is Xochitl Medrano and I am reaching out to you on behalf of Leslie Swan and Kris Murray with Anaheim First.

We would love for you to speak again to Anaheim First members at our Onboarding meetings to talk about how the city’s Planning & Building Department operates and what residents should know about zoning. We are hoping you are available on June 19th and June 26th (both at 5:30 pm at the Chamber).

If you can let us know at your earliest convenience that would be most helpful. Also, if you cannot attend and would be able to send someone that would be great too!

Hi Xochitl. I am out of town at a family reunion on the 19th but available on June 26. Does it work if I only attend on the 26th?

The next day, Leslie Swan, Director of Anaheim First, jumped in by sending out an email graciously thanking Belmer for “accepting to speak to the Anaheim First Neighborhood Leadership Council on June 26th.” But Swan then quietly added Murray to the discussion, using the email address of her political consulting firm, KLM Strategies:

Hi David, thank you for accepting to speak to the Anaheim First Neighborhood Leadership Council on June 26th. These are additional members, 10 for each district. We offered two dates for convenience purposes. Since we are splitting up the group in two sessions is there anyone in your office that could walk through the presentation you shared with us last September and Q and A’s? In our meeting here with the consultants, there was mention that many community members do not understand zoning and planning. We thought your presentation to Anaheim First Advisory Board in September is one that is on point with the process of the upcoming assessment. If you could assist us with someone from your office on the 19th it would be greatly appreciated. We are looking to have the meeting here at the Chamber 2099 S. State College Blvd. Suite 650, Anaheim at 5:30 pm. If there is any change on the location we will reach out to you. Enjoy your family reunion!

A copy of the entire chain of emails can be downloaded here.

What role Murray has played in Anaheim First has been the subject of widespread speculation for several months now. Hundreds of photos reviewed by the Investigator clearly show Murray has been a visible presence at their secret meetings, including one held at the Anaheim Convention Center on March 13th where she was seated next to Councilman Jordan Brandman.

Mayor Sidhu speaks to members of Anaheim First during a secret meeting at the Convention Center while Brandman eats a salad and Murray snaps photos.

The emails the Investigator uncovered not only reveal that Murray’s involvement in Anaheim First is much deeper than what is publicly known, but they underscore the political nature of this group. Murray and Swan are friends of Mayor Sidhu. So is Xochitl‘s father, Ernesto Medrano. In fact, all three were guests at Sidhu’s victory party at his Anaheim Hills estate last December.

For matter of record, the Investigator sent two emails to Anaheim First asking for more information about Murray’s work for their group.

The following questions were posed:

Is she an employee or independent contractor? How much compensation is she getting? Is she being paid a regular salary? Or a flat fee?

A similar message was sent to Murray at the email address she uses for KLM Strategies.

But so far, they haven’t responded.