According to copies of emails the Anaheim Investigator obtained last year from the City of Anaheim under provisions of the California Public Records Act, OC Human Relations, a county-sanctioned non-profit agency involved in issues ranging from dispute mediation to combating hate crimes, quickly dispatched a team of two persons to canvass the working-class Mexican neighborhood of Anna Drive in the aftermath of “Operation Halo,” a law enforcement operation which reportedly targeted a local “street gang” whose members were alleged to be engaged in drug trafficking, murder, and other offenses. Although on the surface, the canvassers’ activities appear to be relatively harmless, most of the information they gleaned from Anna Drive residents–some of it apparently quite sensitive–was immediately relayed to Anaheim Police Chief John Welter by Rusty Kennedy, Executive Director of OC Human Relations.

The emails in question, all written by Kennedy, state that canvassers Edgar Medina and Joyce Sanchez spent several hours knocking on doors and talking with Anna Drive residents during the morning of Friday, August 10, 2012–not long after dozens of Anaheim Police, FBI, and Bureau of Alcohol, Tobacco, and Firearm agents swept through the neighborhood, making a number of arrests.

In one email entitled, “Briefing from Anna Dr and Neighborhood,” Kennedy boasts to Chief Welter his canvassers “made contact with at least 25 families including those who had family members arrested. They assisted them to understand the process.” Among the information they collected, he writes, was that “Some associates of Manuel Diaz suggested that the raid was retaliation for the demonstrations and trash burning and rock throwing.” Kennedy warns Welter “Some of the youth might be more problematic tonight. Possibly lighting trash fires or blocking streets is possible.” In closing, he says “We are not sure how to manage potentially explosive gatherings in the neighborhood tonight and through the weekend.”

“I think the information you’re providing is very valuable,” Welter wrote back in response. “Did you plan on making any of this public? It could help other residents come forward if they see others trust to work with police. Thanks for you and your team for getting out there early.”

Kennedy replied: “I have been including all of the key leaders in the e-mails, and Edgar and Joyce have been open about our collaboration all in the hopes that we project an image of working together with you and your department.”

But despite the claim “key leaders”–most of whom don’t live anywhere near Anna Drive–were made aware of OC Human Relations collaborative efforts with the Anaheim Police Department, it is not clear if any of the residents themselves were notified beforehand that their information would be passed on to Welter. A more interesting question is whether or not anybody in that neighborhood would have cooperated with the canvassers had they known this was going to occur.

These emails, in addition to several others currently in the possession of the Anaheim Investigator, are revealing in that not only do they offer compelling evidence of the very close relationship that has always existed between the Anaheim Police Department and OC Human Relations, but it calls into question the latter agency’s ability to be fair and impartial in any future police oversight committee that might be created in the City of Anaheim.

At the Tuesday, January 15, 2013 meeting of the Anaheim City Council, City Manager Bob Wingenroth submitted a staff report strongly hinting the city could “utilize the pre-existing partnership with the Orange County Human Relations Commission” if it decides to form such a committee. He further added representatives from that agency “have already served our community in pivotal times, assisting our police department in fostering dialogue with the community.”

If by “community,”  Wingenroth was making reference to the Anaheim Police Department, then nobody can deny that, based on the flurry of emails that Kennedy exchanged with Welter throughout 2012, OC Human Relations has served them extremely well.

Following up on two officer-involved shootings that occurred back-to-back one weekend in July 2012, Kennedy shot off an email to Welter making a few revealing remarks which inadvertently exposed his agency for what it truly is: a lapdog for law enforcement:

I [sic] and my staff are completely available to you 24/7, let me know how we can help. If you would like another set of ears at the table as you process this and plan the community relations aspects, I can come over now.

[Below are electronic reproductions of emails used in this article. To read them, all you need to do is click on them to enlarge] 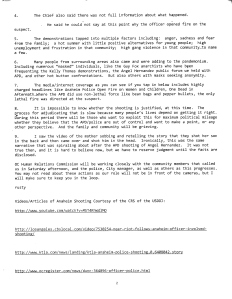 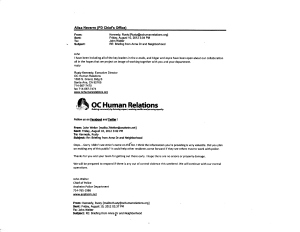